Within Texas, credible proposals have been made for the extraterrestrial impact origin of six geological structures. Convincing cases have been made for three of these structures, i.e. Marquez structure (Leon County), Odessa crater (Ector County), and Sierra Madera (Pecos County), of being of impact origin (Gibson 1990; Littlefield et al. 2007; Howard et al. 1972; Wilshire et al. 1968; Wong 2001). The Bee Bluff structure in Zavala County, Texas, is disputed (Sharpton and Nielsen 1988; Jurena et al. 2001). Another proposed Texas impact structure, the Wilbarger structure in Wilbarger County, has been discredited by detailed field research (Nelson 2006). The origin of the last of these structures, the Hico structure, which lies in Hamilton-Erath County, remains an unresolved mystery.

The Hico structure is a circular disturbance that is developed in Lower Cretaceous strata, upper Glen Rose, Paluxy, and lower Walnut formations about 3 km (1.8 miles) north of Hico, Texas and 32.085 degrees north latitude and 98.0342 degrees west longitude. On aerial photographs, it appears as a circular feature about 3 km (1.8 miles) in diameter (see map). The arc segments comprising this anomaly consists of tree lines and drainages associated with ring-like troughs, which encircle the central uplift of the Hico structure. On Landsat imagery, the Hico structure is at the center of a subtle 9-km (5.5-mile) in diameter circular feature (Wiberg 1981, 1982; Milton 1987). 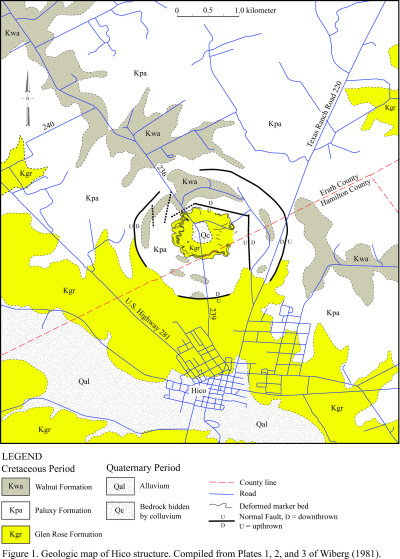 Map of the Hico structure, Hamilton-Erath Counties, Texas
(Click the image to open a high-res map in a new window)
History
Mr. William J. McBride first discovered the Hico structure in 1953 while mapping the geology of Hamilton County for Humble Oil and Refining Company. In 1956, they drilled the center of this structure looking for oil and gas. Unfortunately, well logs and other data acquired during the drilling of this well and McBride’s original report were lost in a warehouse fire (Wiberg 1981). If copies either of the report, well logs, seismic sections, and other data were archived elsewhere and survived the fire and could be located, they might provide invaluable data concerning the origin of the Hico structure.

Later, Mr. Oscar Monnig, a Fort Worth meteorite collector and amateur astronomer, pointed out this enigmatic structure to Dr. James R. Underwood, who at the time was a professor for West Texas State University, as a potential impact structure. Later, Dr. Underwood suggested to Ms. L. Wiberg that the Hico structure would be a suitable subject of study for a master’s thesis at Texas Christian University. This research yielded Wiberg (1981, 1982) and Milton (1987). Approximately twenty years after Wilson (1981, 1982), Heggy et al. (2004) examined the Hico structure using ground penetrating radar and analysis of SRTM Digital Elevation Model.

Local Geology
The bedrock, in which the Hico structure has developed, consists predominately of nearly horizontal, Lower Cretaceous marls, limestone, and sandstone, which dips about 3.5 m per km (18.5 ft per mile) towards the southeast (Figure 1). The oldest strata exposed within the vicinity of the Hico structure is 24 m (79 ft), which belongs to the upper Glen Rose formation, of micritic and fossiliferous limestone alternating with resistant beds of marls. Overlying the Glen Rose Formation is 15 to 20 m (49 to 66 ft) of reddish brown, friable sandstone, which contain hematite concretions, of the Paluxy Formation. Some 40 m (130 ft) of the lower and middle Walnut Formation, which consists of calcareous clays and thin-bedded limestones overlies the Paluxy Formation and outcrops in the vicinity of the Hico structure. Both the Paluxy and Walnut formations contained distinctive limestone and sandstone marker beds, which were used to map the deformation of strata within the Hico structure in detail (Wiberg 1981; Milton 1987).

The central uplift of the Hico structure, as illustrated by Wiberg (1981) and Milton (1987), consists of outer and medial zones of circumferential folding surrounding the center of the structure, which is hidden by colluvial deposits (Figure 1). The outer zone of folding consists of open, undulating “pie-crust” folds, which are defined by the marker beds recognized by Wiberg (1981). Towards the center of the feature, these folds become tighter to form a medial zone of chevron folds with axes radial to center of the Hico structure. These folds consist of vertical or near-vertical beds of Glen Rose limestone. Holocene and Quaternary colluvial deposits blanket the center of the central uplift. As result, neither the age nor the structure of the rocks comprising the center of this structure is known. Wiberg (1981) and Milton (1987) suspects that the bedrock within the center consist of Pennsylvanian age sandstones of the Twin Mountain Formation, which have been uplifted by as much as 80 m (260 ft) (Wiberg 1981, 1982; Milton 1987).

Wiberg (1981, 1982) and Milton (1987) argue that a ring graben surrounds the central uplift. They concluded that the outer boundary of this ring graben is defined by a series of major faults, which are part of a ring fault (Figure 1). The inner boundary of this graben consists of numerous obscured faults, which have small displacement ranging from 8 to 18 m (26 to 59 feet). Within the ring graben, erosional outliers of Walnut Formation have been downfaulted into Paluxy and Glen Rose Formation. Although largely obscured by alluvial and colluvial deposits, circumferential folding also appears to be present within the ring graben (Wiberg 1981, 1982; Milton 1987).

Wiberg (1981) reported observing a subtle 9-km (5.5-mile) in diameter circular feature, within which the Hico structure lies at it center, in Landsat imagery. She was unable to find a geological explanation for this feature.

Later, Heggy et al. (2004) examined the Digital Elevation Model (DEM) constructed from the Shuttle Radar Topography Mission (SRTM) data. They found three previously unrecognized topographic rings, of which the outermost one is 5 to 6 km (3 to 3.7 miles) in diameter. Ground penetrating radar study of these rings indicated that these rings are controlled by ring faults similar to those that form the outer boundary on the ring graben.
They concluded that the outermost ring represents the true diameter of the Hico structure. They make no mention of the 9-km (5.5-mile) in diameter feature observed by Wiberg (1981).

Evidence of Shock Metamorphism
Wiberg (1981) collected samples of a marker bed composed of calcite-cemented sandstone from outcrops of folded Paluxy Formation exposed in the central uplift of the Hico structure. Powered samples of this sandstone were analyzed using x-ray diffraction. No indication of coesite, a high-pressure form of quartz created by extraterrestrial impacts, was found in these samples. She also prepared samples of sandstone and limestone from the folded strata from the central uplift. She found a lack of any evidence of shock metamorphism in either the sandstone or limestone samples (Wiberg 1981, 1982; Milton 1987).

Milton (1987) examined two borrow pits exposing friable limestone of the Glen Rose Formation within the central uplift. In one borrow pit, she found surfaces exhibiting convergent striations. Although the striations are irregular due the friable nature of the limestone, they were interpreted by Milton (1987) to be shatter cones.

Discussion
According to the Spray and Hines (2007), the principal criteria for determining if a geological feature is an impact structure formed by the hypervelocity impact of a meteorite or comet are (1.) presence of shatter cones, (2.) presence of shocked quartz with multiple planar deformation features within in situ minerals, (3.) presence of high-pressure mineral polymorphs within in situ minerals, (4.) morphometry of the structure, (5.) presence of an impact melt sheet and/or dikes, and impact melt breccias, and the presence of impact pseudotachylyte and breccias associated with radial and concentric fault systems. So far in terms of these criteria, only the morphometry of the Hico structure and report of shatter cones by Milton (1987) having been found in a borrow pit appear to meet these criteria. Unfortunately, Milton (1987) provides neither the detail descriptions nor photographs needed to document the occurrence of shatter cones. As a result, the existing published evidence is inadequate and insufficient to demonstrate the existence of shatter cones associated with the Hico structure.

In addition, another unanswered question is the significance of the 9 km in diameter feature reported by Wiberg (1981). The existence and origin of this circular feature was completely ignored by Heggy et al. (2004)’s investigation of smaller circular features. Whether it is real, how it formed, and what is its relation to the Hico structure remains an unresolved mystery.

Acknowledgments
I thank Douglas Carlson, Assistant Professor of Research, Louisiana Geological Survey for taking the time to review this article and his advice on how to improve it.


This article is a re-print from the Houston Gem and Mineral Society Bulletin,
and it is published with permission.
Posted by Lunar Meteorite * Hunter at 10:42 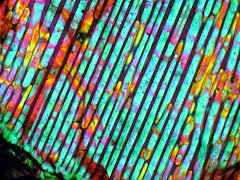